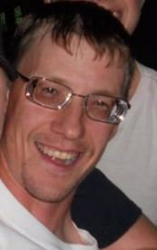 Dennis M. Osborn, 34, Seneca, MO, passed into eternal rest May 22, 2011 from injuries sustained from the tornado that devastated Joplin, MO.

Dennis Melvin Osborn was born June 3, 1976 in Savannah, ILL. the son of Richard Joel and Helen Azenith (Rothenbeuhler) Osborn. Dennis had worked for Jasper Foods and was a member of the 203rd National Guard and served his country in Iraq War. Dennis married Steffannie Michelle (Hufferd), April 15, 2000 in Joplin, MO and she survives.

Dennis was preceded in death by his father Richard Osborn in November of 2000.

Funeral services under the direction of Campbell-Biddlecome Funeral Home, Seneca will be held at Racine Christian Church, Monday, May 30, 2011 at 2:00 PM, with John St. Clair officiating. Burial will be in the Seneca Cemetery with Mike Malone, Thomas Malone and members of the 203rd Juliet Honors Team serving as pallbearers. Honorary pallbearers will be Brandon Fought, Cody Fought, Drew Osborn and Jessie Osborn.

The family will receive friends from 6 to 7 PM, Sunday, May 29, 2011 at the Campbell-Biddlecome Funeral Home, Seneca.

Military rites will be conducted at the graveside by Juliet Honors Team of the 203rd National Guard, Joplin.
Oster, Charles E.
Charles E. Oster was born July 30, 1933 in Roads, Missouri, the son of Raymond Oster of and Velma Rosebud Hampton Oster. He entered into rest on May 22, 2011 as a result of the tornado.

Charles was a lifelong area resident and had served in the U.S. Army during the Korean Conflict. He currently was semi retired, working for Share Corp, Milwaulkee, WI in sales. Charles was a member of the First Christian Church in Webb City and served as a deacon.

Preceded in Death By